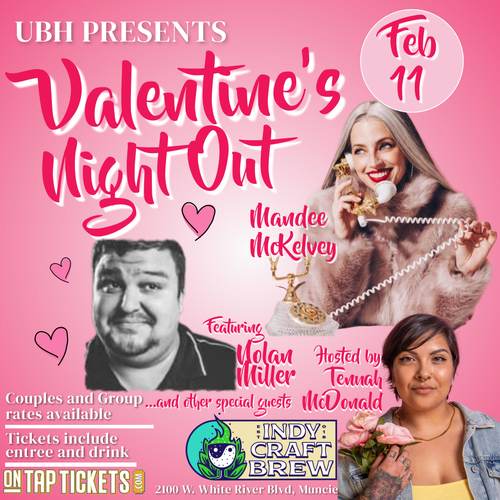 It's been a long, cold winter so we're turning up the heat with Valentine's Night Out! Bring your favorite person, save money. Bring a few favorite persons and save even more! Don't worry about dinner plans, each ticket includes an entrée and drink of your choice. The regular menu will be available for any additional ala carte items as well! Headlining will be Mandee McKelvey, featuring Nolan Miller, hosted by Tennah McDonald, and other special guests.

Mandee McKelvey has been infatuated with stand-up comedy since the age of five. After telling her mother a wildly inappropriate joke that nearly got her grounded for life, she realized the power of the spoken word. She remembers thinking, “If I live to be six years old, I’m gonna do this more often.” Finally summoning the courage to go on stage in 2006, she’s been at it ever since. She won Character Comedian of the Year at the 2013 Carney Awards, the first and only female to be nominated, as well as, 2016’s Ms.Comedian of the Year. Mandee’s favorite character to play, however, is herself. Finding endless inspiration from her South Carolina roots and her ill-timed social anxiety, Mandee will aggressively try to make you fall in love with her… and then she will run away and blame you.